You can customise the cookies options while browsing AliveShoes.

Introducing MasterPeace Visionary Pairs also known as MVP.Shoes by MVP.industries. Lace them up, strap them on & prepare to feel the difference of hand crafted Italian fabrications customized to your desire & comfort. "Soles" & Materials without a shelf life, so you can use what you own for years to come rather than contributing fast fashion to our landfills.

Made in Italy
MasterPeace VISIONARY PAIRS by Michael Porter Sporty running trainer
Made in Italy

Let the 90's come back! Inspired by the university sport spirit of the 70’s and enriched by the logo on the side CUSTOM CRAFTED IN ITALY AND SHIPPED TO YOU

Each design is meticulously constructed by a skilled network of selected Italian artisans, there are no finer hands in the field. The handcrafting and the materials, are state-of-the-art.

The goal of MasterPeace is to enrich that nostalgic life style we once had to grow out of. Not by choice, but because we were told to do so. Well, POP culture is back! Say hello to the new N.E.S. (Nostalgic Enthusiast Shoe). Please allow at least 30 days for the arrival of your shoes, They are hand made for you, so please plan accordingly. Introducing: Van, No-S (My Father's named Van): A walker, Designed for our fathers from an era when they likely used members only jackets, team hats if not veteran hats. Aimed for your Pops, named after My Dad, with a hidden poetic message to our fathers & their "soles" located behind the tongue of this Italian walking shoe. Just in preparation for production, making it perfect timing for Father's Day. The Amma TQM: A "sole" only a mother could love, with a sense of fashion or just a taste for gold. A Mother's spirit can be lifted in a pair of Amma TQM's (Available but may not arrive on time for Mother's Day- Allow 20-30 days please). The KnightRide Series: "Elegant, Quiet Basic Black". Trimmed in burnt red that mimics the stealth like vehicle you never saw. Take your "Sole" out for a "KnightRide". The MERC-mouth Variants: A representation of the assassins era of ninja lookalikes in Comic Books, Movies and Cartoons. A silent sneaker which will creep up on you and thrill your "Sole". The ComfortLux Lineup: Like a Skater shoe and Derby dress shoe had a offspring. Uplift your "Sole" in what feels like tennis shoes with flair in a pair of MVP's-ComfortLux. The Mia G.P.R Boots: Named after my Sis, as a child I could not say her name correctly, so Mia it forever stayed in my "sole". Da'Boo's Pet Lineup: Each model to come will have a different look to match the "sole" of each fur baby no longer with me physically. The M.J's Line: Honoring greats of the past with matching initials, talents and "Sole" in their quests to legendary status. Thank you for reading the intro to MasterPeace's lineup presented by http://www.MVP.shoes of MVP.industries, Designed by M.V.Porter

Custom crafted
Made in Italy 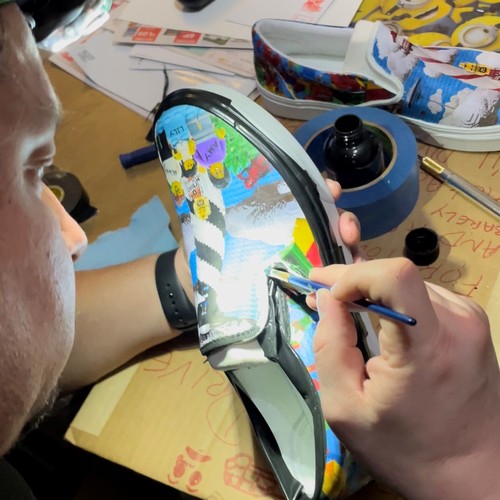 Did the early Music and Arcade POP Culture era touch you as much as it did my life? How about Comic Books, Cartoons and Movies of that same time frame from the 80's-90's? Well, for me it became a lifestyle but remembering the good days of POP Rocks, Squeeze it's and Bubble Chew faded with age. I knew what I wanted then but I grew up only knowing a small few who got to live the lifestyle of obtaining POP culture nostalgia while I only get to read or see those lifestyles reached by the now wealthy. Personally being lucky enough to know a few icons of our past, I've decided to share my childhood interest and lucky encounters through the styling of my shoes. This is why I am creating MasterPeace Visionary Pairs a.k.a. http://www.mvp.shoes by MVP.industries , stylized, colored and manufactured to fit our memories, desires of what once thrilled our inner kids. Recreating that feeling of coming home, "Not" kicking off your high-tops, canvas lace-ups or B-Ball Pumps because they mattered. instead throwing that backpack aside only to turn on that classic Bulb TV and start your recreational afterschool addiction! LOL, I meant hobby ;-D For me it was more than a hobby, I spent every day drawing, gave up my recess and lunch to my pencil and paper. Taking on the bullies who made fun of the loner who also happened to be a "privileged" kid of a teacher and husky too. Being a bullied kid drove me further, I utilized my spare time making cold calls and narrowing down who I could find in the Comic Book, Cartoon and TV/ Movie Industry using phonebooks and having different area code books mailed to our house whenever available. I was Lucky, My farther a great man and Teacher who educated at Monterey Highlands in Monterey Park, was one of Data's Teachers. No, not Data from Star Trek. The one from Goonies, his sister educated my sister and I with the proper use of chopsticks too. So that I could stop running around thinking I was a Ninja Turtle every time I had a chopstick set in my hands. I had a list of great pen-pals by the time I reached 12 years of age but at the cost of getting grounded for crazy long distance phone calls, way before cell phones and free long distant billing, So totally Worth the trade! Getting to Know greats such as Comic Book creators, illustrators, writers, to voice actors, TV/Movie actors like a few Power Rangers and even being the consistent server to the "Hoff" himself at a restaurant I worked at in his local housing town. My father always allowed multiple sick days from school to explore movie sets when Hollywood filmed near by. Such as "Father of the Bride 1-2, JFK, Old School" and many more. Now I just want to lay down my personal experiences and memories as color pallets and transition them to the materials and "Soles" of recognizable kicks for your enjoyment and comfort experiences. Thank you for glancing, -Mike Van Porter-

Oops, something
is missing

Thanks for submitting the e-mail!

Time to try your luck now, you can win great discounts or a free pair. Roll to begin!

Oops! the size of the image is not correct

Hey there, the image you have uploaded is not of the right size, we advice to upload again with this dimension 800px x 445px to have a good end-result on your shoe.

Upgrade your account to PRO for $99 (one-time, lifetime fee) to access amazing features and boost your custom shoe line even further.

We'll transform your sketch or picture into a unique white shoe template, that you can then customize as you want, using our tools.